The families of the 56 people who lost their lives on 11th May 1985 at Valley Parade will be asked particularly to address a marking of the disaster anniversary, confirms Bradford City chairman Mark Lawn.

Despite the Hillsborough disaster, of about the same scale and circumstances, gets heavy recognition in mainstream media on every annual anniversary, the Valley Parade stadium fire is more or less going under the radar. Next year, there will be 30 years since a stand on Valley Parade caught fire. 265 people returned from the game in injured condition, and 56 people never returned at all. 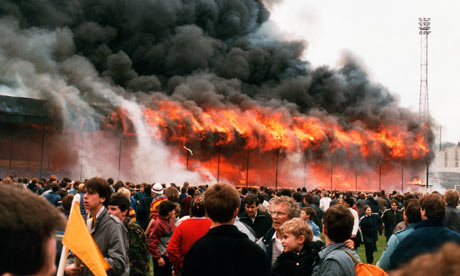 Valley Parade being eaten by a lake of flames

The Bantams do always have a minute’s silence before the final home game of the season, but the rest of the country seems to carelessly walk past the horrific incident without paying too much attention. There were 96 empty seats at Anfield, one minute fof silence , and the games that weekend were scheduled for 3.07pm when Liverpool marked the 25-year anniversary of the Hillsborough disaster in April this year. For the Valley Parade disaster, there were no minutes of silence (except at Bradford), no rescheduled games and no empty seats to mark anything anywhere on the 25-year-anniversary in 2010.  That might come to a change next season.

“In terms of how anniversaries or anything else are marked, we are guided by the families of the 56. That is how it should be and how we, as a club, will always be”, stated Mark Lawn according to the Yorkshire Post. “To me, the families must have the final say so we will see what happens. If their wish is for the 30th anniversary to be marked with a minute’s silence all around the country, then we will push for that with the appropriate authorities.”

A fan left his scarf and a rose on a memorial monument back in 2010.

Subsequently Lawn handed credit to Peterborough, who a bit surprisingly joined Bradford’s minute of silence this year: “What Posh did off their own backs by holding a minute’s silence was a wonderful gesture. I have been away for the weekend so didn’t know about that until you mentioned it, but that shows what the football fraternity is like.”