Erik Alonso has urged Derby County fans to “stand up and claim what is theirs” and defended Rams owner Mel Morris via a message on Instagram.

Derby announced on Friday that they were filing for administration after a difficult few years, with the EFL subsequently confirming that a 12-point deduction would be forthcoming.

One of the factors that led to the East Midlands club’s decision was the inability to find a buyer to purchase the club from Morris, who has been looking to sell for at least 18 months now.

Alonso was involved in one of multiple takeover bids to have fallen through in that period and the Spaniard has taken to Instagram to have his say on the situation, urging Rams supporters to take action and defending the club’s current owner. 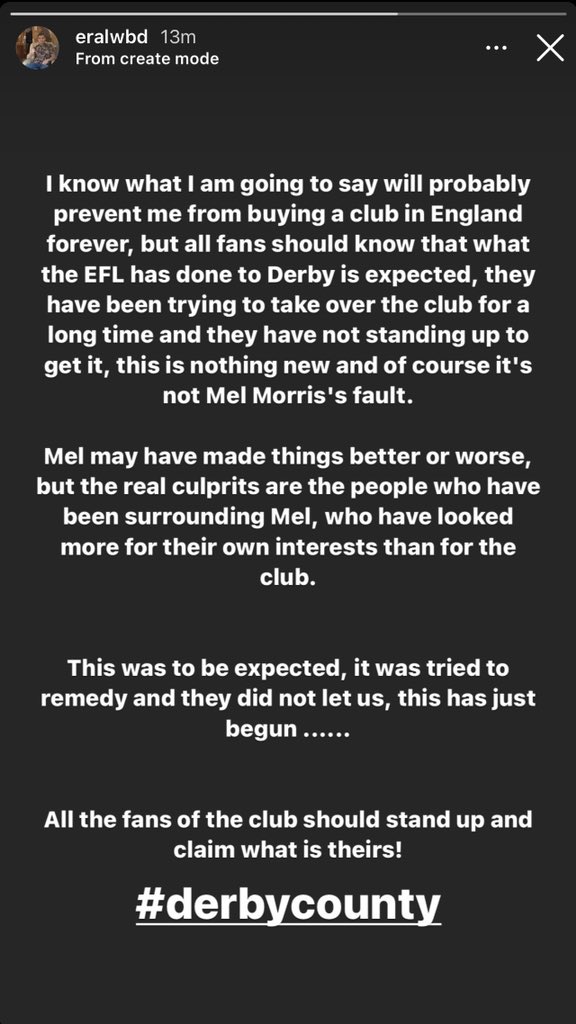 This looks set to be a massive week for Derby, with the Pride Park outfit’s future seemingly hanging in the balance.

Wayne Rooney led his side to an impressive 2-1 win against promotion hopefuls Stoke City on Saturday and pledged after the game that he would not walk away despite the off-field struggles.

Rooney’s team are 12th as things stand but will drop to the bottom of the Championship once the 12-point deduction has been applied.

This message from Alonso is likely to frustrate Derby fans more than anything.

At one point, the Spaniard appeared as though he may be the club’s saviour but the takeover bid that he led eventually crumbled with question marks over its validity.

For him to call on Rams supporters to do anything is certainly rich and unlikely to be met with anything but frustration from the Pride Park faithful, particularly given he appears to defend Morris in his message.

The next few days could be a defining period for Derby, hopefully it sees the club move in a positive direction and this is the lowest point of the affair.